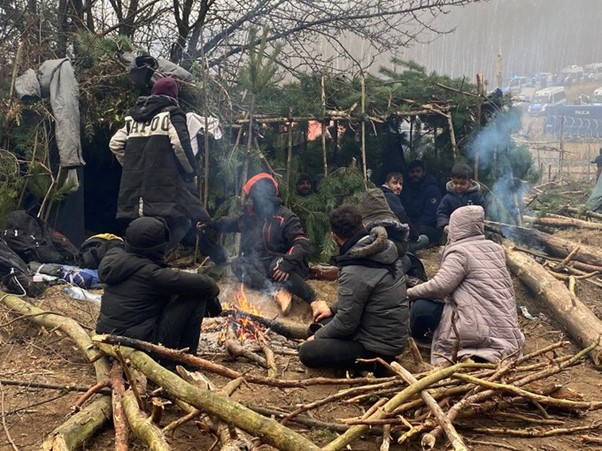 At the Polish border, the newest installment of a European “migration crisis” is taking place. Migration flows came to their highest peak as a result of asylum seekers fleeing war in Syria and conflict in Iraq and Afghanistan and have, since then, sown some division in European decision-making since 2015.

The latest events in the Belarus-Poland border prove particularly complex as it comes from a diplomatic crisis between Poland and Belarus. The EU and the US Government imposed sanctions on Belarus for human rights violations and attacks on democracy and international norms. Consequently, Belarus started pushing its migrant population towards the Polish borders. The fact that this particular crisis comes as a manifestation of reprisal from Belarus following EU sanctions does not excuse the lack of commitment and unity displayed by Europe in solving the disastrous humanitarian situation at hand. Several people have lost their lives at the border, where between 2,000 and 3,500 remain stranded in makeshift tents amidst a border stand-off in which nobody takes responsibility. Liz Throssell, spokesperson, Office of the High Commissioner for Human Rights has stated “It is a terrible situation, we are seeing people in terrible circumstances, in the bitter cold, even reports that people have died”[1]. It has also been estimated that at least 50% of the people stranded at the border are women and children.

The hostile attitudes and policies adopted by EU member states are intolerable and stand in direct contradiction to the human rights values of the European Union. The Polish government and other bordering European countries cannot and must not be allowed to set up fences and barbed wire that endanger the integrity of migrants and refugees. This is particularly troubling as the border regions have been shut to journalists and NGOs who have no access to the field and cannot carry out their reporting and monitoring duties. Following the state of emergency ruling that started in September, Poland does not allow access to the emergency zone that is the Polish border with Belarus. The European Union should be no place for this kind of censorship and reporting should not in any way be restricted as transparency is fundamental to accountability.

Bordering EU countries have been largely abandoned by the European Union who has failed to adopt a cohesive border policy respectful of humanitarian needs and human rights standards and enforce an adequate and equal distribution of migration. Lack of consensus within the EU has led some member states to take matters into their own hands and enforce brutally tough border policies that have little regard for human rights. Poland is one of such states. Increasing migration has awakened a sense of urgency that coupled with extremist ideas has derailed into brutal migration policy. Only a month ago, Poland’s parliament passed legislation to enable pushback which constitute a breach of European and international law[2].

Geneva International Centre for Justice (GICJ) calls upon the European Union to investigate and hold Poland accountable for its violations of European asylum law and international obligations. Poland is obliged to act in compliance with the European Convention of Human Rights[3]. Border security forces must comply with international law and act under the customary principle of proportionality and should be investigated for deaths of migrants at the borders. Furthermore, we recall that the principle of non-refoulement is enshrined in international treaty law since the 1951 Refugee Convention which protects the refugees in the Polish border from being returned to Belarus without individual assessment.

GICJ is concerned by the narrative on this situation which exclusively revolves around the diplomatic crisis between the EU and Belarus when it is in fact also a humanitarian one. All must prioritise the wellbeing of the migrants and refugees that face extreme weather conditions and human rights violations from local law enforcement. The UN must call on member states to align with the human rights values of its Charter, and adopt an asylum policy which protects the lives of refugees and not jeopardize them for any political reason.

[3] The European Convention on Human Rights (ECHR), signed by 47 states, defines a ban on collective expulsion in its IV Additional Protocol.