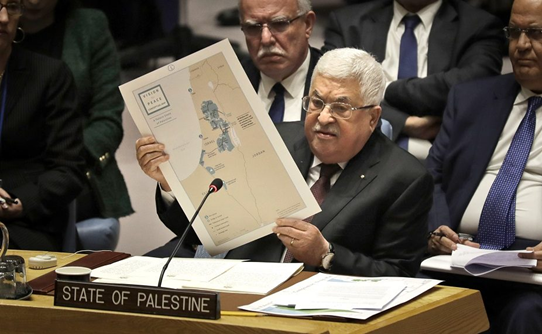 The Security Council held a meeting on 11 February 2020 under the title “the situation in the Middle East, including the Palestinian question”. The meeting focused on the US so called “peace plan” released on 28 January 2020. Secretary-General Mr. Antonio Guterres and Special Coordinator for the Middle East Peace Process Mr Nikoly Mladenov reaffirmed the United Nation´s long-standing position on the two-state solution, based on the pre-1967 borders.

Geneva International Center of Justice (GICJ) strongly believes that the plan is symbolic of Israel and the United States´ deliberate lack of respect of the basic principles of human rights and humanitarian law. These actions also directly contradict the numerous United Nations resolutions, which are a product of the international community´s tireless efforts to find a peaceful solution.

The Palestinian Authority, the League of Arab States, and the Organization of Islamic Cooperation, have all rejected the peace plan, which does not even meet the minimum aspirations of the Palestinians.  The plan dismisses all the previous deals, as well as the two-state-solution. It proposes the recognition of Jerusalem as the “undivided” capital of Israel. As a result, the Palestinian capital would be located east of Jerusalem. The plan would also recognize the Israeli settlements in the Occupied Palestine Territory, which have been declared illegal and constitute a flagrant violation of international law according to the United Nations the Resolution 2334.

Moreover, the Jordan valley, which makes up about a third of the occupied West Bank, would be recognized as part of Israel. In exchange for this loss, Palestine would receive additional land, mostly desert, near Gaza. Tens of thousands of Arab Israelis who live in the border towns would also be stripped of their citizenship. Finally, the proposal would compromise Palestinian refugees’ right of return to homes lost to Israel during previous conflicts

President of Palestine rejects the Plan

Mr. Mahmoud Abbas, President of the State of Palestine, was very clear that he rejected the plan. It fundamentally disregards all of the Palestinians’ vital aspirations, a consequence of the plan being drafted without the involvement of Palestinian leaders.  The plan is  not only a gross violation of international law and the Arab Peace Initiative, but it also ignores Palestinian rights to self-determination, freedom and autonomy.As a result, the proposal would  strengthen the apartheid regime in which there would be one State with two different systems. GICJ affirms that Israel should be held accountable for the crimes it has committed, are still committing, against the Palestinian people.

In contrast, in its statement Israel criticized Palestine and its intentions. Israel argued that President Abbas was not serious about finding a peaceful solution because Palestine presented itself before the Security Council and not before Israel or Washington. Geneva International Center for Justice believes that this argument is ridiculous as it goes against of what the Security Council represents, an organ in charge of international peace and security.

The United States, which is the only permanent member of the Security Council aligned with Israel, argued that the plan would give a new perspective and a fair hearing to Israelis and Palestinians. On the contrary, Russian Federation condemned the US´s statement by stating that the plan fails to replicate the core elements of an internationally recognized legal framework, as set out in numerous United Nations resolutions. China shared Russia´s view, adding only that it was highly concerned about the economic and humanitarian conditions in Palestine. France highlighted the unilateral nature of the proposal; it is written to benefit Israel, and Palestinians are merely a secondary concern. However, Germany and the United-Kingdom were the only states to argue that the proposal needed to be considered. As for the non-permanent members Estonia, Saint-Vincent and the Grenadines, Viet Nam, South Africa, Dominican Republic, and Belgium all unanimously condemned the proposal.

The meeting on the situation in the Middle East, including the Palestinian question had been called on by Tunisia and Indonesia. Both countries strongly condemned the plan. As a result, they are currently preparing a draft resolution with a view to end the Israeli occupation and find a solution to the conflict.

Palestinian people protesting against the plan

Parallel to the Security Council´s meeting on the situation in the Middle East, including the Palestinian question, thousands of people took the streets in the West Bank and Gaza protesting against Trumps so-called peace plan. In the cities of Ramallah and al-Bireh, the Israeli army tried to scatter the protesters using tear gas shells that caused choking to numerous protesters. Israeli security forces have also made it virtually impossible to report about the protest. Two journalists had been detained for several hours in the north of the Jordan Valley. In addition, Israeli soldiers verbally abused other journalists on the spot, pushed them violently, and banned them from filming or taking photographs.