Report on the Interactive Dialogue with Special Rapporteur on Minorities Issues

The Special Rapporteur on Minorities Issues, Mr. Fernand de Varennes, delivered two reports A/HRC/46/57 and A/HRC/46/57/Add.1 to the 46th session of the Human Rights Council, discussing respectively the widespread targeting of minorities through hate speech in social media as well as reporting on his official visit to Kyrgyzstan in 2019.

The first part of the report (A/HRC/46/57) provides an overview of the Special Rapporteur’s activities associated with the mandate, as well as his efforts to increase awareness of minority issues among United Nations Member States and to consolidate the organization of regional annual forums, specifically the Forum on Minority Issues. The thematic part of the report stresses that in 2020 hate speech against minorities spread drastically around the world, and racism, prejudice, scapegoating, and incitement to violence was widespread within social media. It also remarks that restrictions of any form of freedom of expression must remain an exception when falling in one of the three categories acknowledged in international human rights law; however, States have failed to protect minorities against prohibited forms of hate speech. Mr. Varennes emphasizes that States authorities and social media platform’s owners should recognize that hate speech is a minority issue, and should thereby take further steps to fully implement their human rights obligations involved and ensure the participation of minorities in their policies and human rights’ bodies assessment.

The second report concerning the country’s visit of the Special Rapporteur (A/HRC/46/57/Add.1) provides an overview of the positive steps and developments operated by Kyrgyzstan towards addressing a range of human rights concerns, including the ratification of UN Treaties, collaboration to tackle discrimination, hate speech and hate crimes against minorities. The overall aim of the report is to outline the existing legislation, policies and practices for protection of minorities of the country concerned and to address existing lacunae or gaps by identifying possible improvements of laws and policies and Kyrgyzstan’s implementation of human rights obligations.  In fact, further elaboration is needed in promoting the protection of human rights of persons belonging to national or ethnic minorities as well as religious and linguistic ones, as a weak implementation persists.

At the 46th session, the Special Rapporteur, by underscoring that the Holocaust did not start with gas chambers but with hate speech, expressed his concern over the rise of hate speech in social media, which mainly targets minorities. He therefore stressed that an international treaty to regulate hate speech in social media is urgently needed, focusing on the most harmful forms of hate speech against minorities so that States know how to behave. As challenges become global, the response needs to be global and a clear, consistent, comprehensive regulatory framework is the answer. This means that freedom of expression remains the main right that must not be affected, even when considering the severest or less severe forms of hate speech acknowledged by the three restrictions grounded in international human rights law. Pertaining to the visit to Kyrgyzstan, the Special Rapporteur encouraged the need for a more comprehensive anti-discrimination legislation. Finally, he pointed out that there are still difficulties to ensure rights to certain minorities and vulnerable groups, such as the inclusion of minority cultures in schools, the limited participation of minorities in public life, and the lack of recognition of sign language.

Several countries and regional groups supported the international need for a comprehensive legal framework to regulate hate speech in social media as to ensure a full respect of human rights and to avoid illegal contents’ spread online. A number of countries expressed concern over the rise of Islamophobia as well as migrants’ discrimination. Muslim minorities and migrants suffer from multiple impacts within their daily life and the enjoyment of their rights and fundamental freedoms are constantly at risk. Kyrgyzstan, the country concerned, responded to show that legislative gaps are being addressed and further elaborated to protect minorities and strengthen the people of Kyrgyzstan.

Geneva International Centre for Justice (GICJ) believes that freedom of expression is a fundamental and inalienable right all human beings deserve, and therefore it should be carefully protected. However, too often, freedom of expression results in hate speech and further targets and discriminates minorities and vulnerable groups. GICJ therefore calls on States to adopt or review a specific legislative framework against certain forms of hate speech in social media, consistent with international obligations. Further, social media platforms should implement monitoring systems to control and prevent hate speech, by including a human rights-based approach in their programs. Finally, we invite the international community, together with relevant UN bodies, to initiate the negotiation for a new treaty extensively addressing the issue of hate speech and other forms of violence in social media. 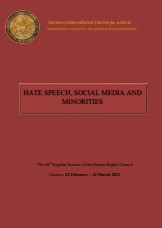