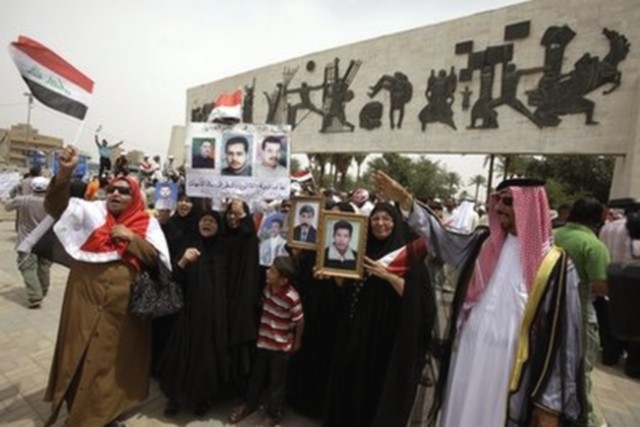 Geneva International Centre for Justice (GICJ) is participating in the review of Iraq at the 9th session of the United Nations Committee on Enforced disappearances, from 7 to 18 September 2015 and has submitted to the Committee its shadow report on Enforced Disappearances in Iraq, expressing its grave concern about the ongoing, widespread and systematic practice of arbitrary arrest and abduction by the Iraqi authorities and its affiliated militias which in most cases result in enforced disappearances.

GICJ, working closely with Iraqi NGOs and human rights activists, has gathered extensive evidence on this issue and repeatedly brought it to the attention of the United Nations Human Rights Council and other bodies. GICJ therefore welcomes the review of Iraq’s report by the Committee on Enforced Disappearances and hopes that the committee is able to take all action within its power to push for an end to this continued practice within Iraq.

The Iraqi government must understand that the Committee on Enforced Disappearances (CED) is not a court and does not function to bring to trial the previous government members. Rather, the Committee is concerned with the obligation of the contractual party of the International Convention for the Protection of All Persons from Enforced Disappearance (ICPPED), which is the current Iraqi government.

Due to the continuing degradation of the security situation in Iraq, and governmental denial of the current state of recent enforced disappearance cases, there is no comprehensive statistic detailing the number of missing persons in Iraq. However, the International Commission on Missing Persons (ICMP), estimates the number to be between 250,000 and over one million.  The International Committee of the Red Cross reported that between 2006 and June 2007 alone, some 20,000 bodies were deposited at the Medico-Legal Institute in Baghdad, less than half of whom have been identified. Unclaimed bodies were buried in various cemeteries around the city.

Although Iraq has ratified the ICPPED, entering into force on 23 December 2010 , the country has not provided an effective legislation to implement it. In the Iraqi judicial system, there is no clear criminalization of enforced disappearance, as the government itself noted repeatedly in its report submitted to the Committee in July 2014 (CED / C / IRQ / 1).

Article 2 of the ICPPED defines enforced disappearance as “the arrest, detention, abduction or any other form of deprivation of liberty by agents of the State or by persons or groups of persons acting with the authorization, support or acquiescence of the State, followed by a refusal to acknowledge the deprivation of liberty or by concealment of the fate or whereabouts of the disappeared person, which place such a person outside the protection of the law.”  However, we have seen no reflection of this definition in Iraqi legislation and as such, these cases are not punishable by law and implementation of the convention inside Iraq remains impracticable.

Moreover, according to the Iraqi Constitution, international conventions have no legal superiority over domestic legislation which means that the ICPPED has the same legal force as Iraqi laws.

The United Nations Assistance Mission to Iraq (UNAMI) was established by the 2003 UN Security Council Resolution 1500. One component of the mission is to promote the protection of human rights and judicial reform.  However, according to information and assessments gathered from Iraqi activists and non-governmental organisations, UNAMI has not been permitted to tackle the issue of enforced disappearances in a comprehensive way. UNAMI has been encouraged to deal only with cases reported to have occurred prior to 2003, as the legal framework and the programmes of the Iraqi government focus on that period only.

In Iraq’s report submitted to the Committee in July 2014, we also find mention of Anti-Terrorism Law no. 13 of 2005 which allows the Iraqi Security Forces to arrest anyone suspected of terrorism. Article 4 of this law details that “anyone who committed, as a main perpetrator or a participant, any of the terrorist acts stated in the second & third articles of this law, shall be sentenced to death. A person who incites, plans, finances, or assists terrorists to commit the crimes stated in this law shall face the same penalty as the main perpetrator.” 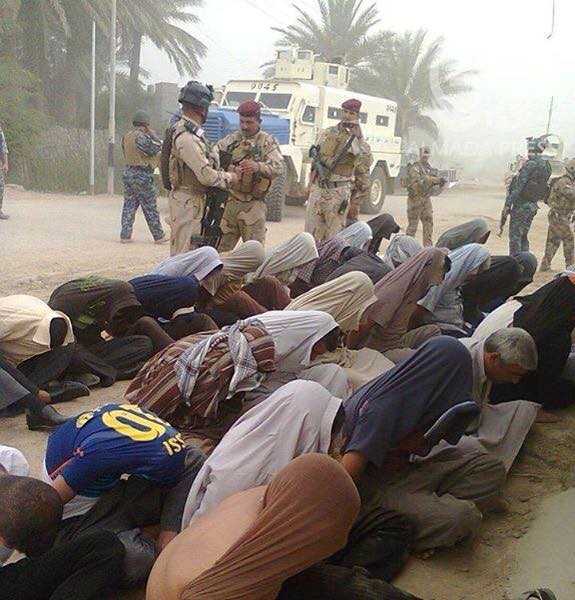 This law was widely used to legitimize the detention of thousands of people by authorities without real charges under the pretext of fighting terrorism. In 2014, UNAMI recommended that Iraq amend this law to ensure that its provisions comply with International Human Rights Law and the Constitution of Iraq. As yet, there has been no positive response to this or other UNAMI recommendations aiming to reform the Iraqi judicial system.

Discrepancy between the Word and the Act

A number of articles (322, 323 and 92) of the Iraqi Criminal Code articulate the illegality of public officials and civil servants carrying out unlawful detentions, inflicting excessive or unlawful punishments and arresting citizens without a warrant. The importance of the existence of these laws is that officials may be brought to justice for such violations, but we have not found cases relating to these articles passing through Iraqi courts. Likewise, in the testimonies reviewed by GICJ, detention without warrant or detention with a warrant issued post-arrest are the norm. In this way, government officials and security personnel enjoy a state of impunity and continue to violate human rights, free from repercussions.

In accordance with article 132 of the Constitution, the Iraqi Government has enacted Act No. 20 of 2009 to provide compensation to those who have sustained damages as a result of the war, military errors and acts of terrorism. However, reviewing this law, GICJ found no clear reference to “enforced disappearances” though it mentions the “missing” and thus the law does not confer any legal privileges to the victims of enforced disappearances in the area of reparation and compensation, or rehabilitation.

Under the ICPPED, Article 17 establishes certain guarantees regarding detention, including foremost the guarantee that no one shall be held in secret detention. According to Article 19-B of the Iraqi Constitution, "unlawful detention shall be prohibited [and] imprisonment or detention shall be prohibited in places not designed for these purposes, pursuant to prison laws covering health and social care, and subject to the authorities of the State.” Though this law sits in accordance with the ICPPED, in reality this is not the case. Credible information collected by GICJ proves that there are more than 420 secret prisons in Iraq.  In addition to those secret prisons run by militias, most of the army, police, and security units operate their own secret detentions also.

There are no proper procedures for registering detainees and no records kept in the country. This lack of due process is further compounded by the sheer number of armed security bodies present throughout the country. The multitude of forces mean that it is not always clear during an arrest which authority is in charge of the detention, which ministry they are acting on behalf of, where the persons are taken and of course what the charges brought against the detainee are. GICJ has received numerous communications detailing that in many cases those who carry out the arrests are armed, wearing uniforms and driving government vehicles indicting that they are affiliated with government security forces. However, the government denies the arrests were carried out by their forces.

Who are among the perpetrators?

The Ministry of Defence has participated in the cases of enforced disappearance in Iraq. As an example, under the campaign officially named “Thar al-Shuhada” or “Martyrs’ Revenge”, over a thousand people were arbitrarily arrested and scores killed in just a two-week period, all under the guise of combating terrorism. The allegation that all those arrested were terrorists was refuted by Iraqi Parliament members. On 15 August 2013, Mohammed Iqbal, a representative from Ninevah made it clear that the parliament supports efforts to detain terrorists, but stressed that those arrested in the campaigns were innocent.

Further government implication can be found in the report of the Human Rights Office of UNAMI, issued on September 8th 2005 , which explicitly links the campaign of detentions, torture and extra-judicial executions to the Interior Ministry. John Pace, the former Chief of the Human Rights Office of UNAMI who left Baghdad in January 2006 described that much of the killing was carried out by Shia Muslim militia groups under the control of the Ministry of the Interior. 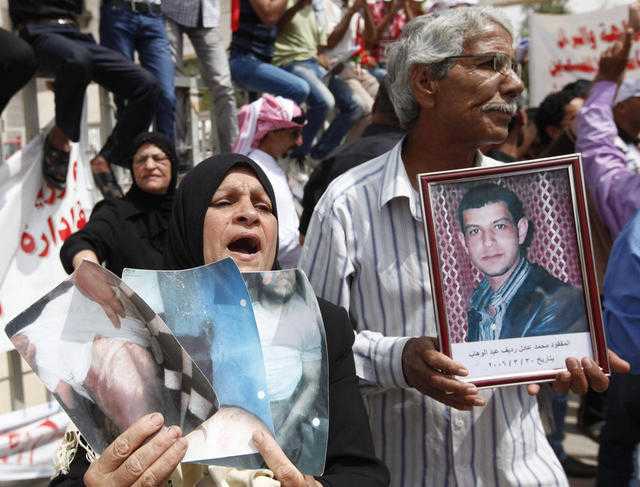 Last year, the UNAMI report on the Protection of Civilians in the Non International Armed Conflict in Iraq: 5 June – 5 July 2014, pointed to cases of killings and other violations committed by Iraqi Security Forces, clearly highlighting a the continuing policy of the governmental bodies. Summary executions, absence of fair trial standards, the use of death penalty, enforced disappearances and other grave human rights violations are unfortunately realities of the present Iraqi human rights situation.

In the early stages of 2003, the occupation authority (Coalition Provisional Authority-CPA) dissolved the Iraqi Army and security units. The CPA established new security forces, police and army. However, the newly formed security forces were comprised primarily of militia members. 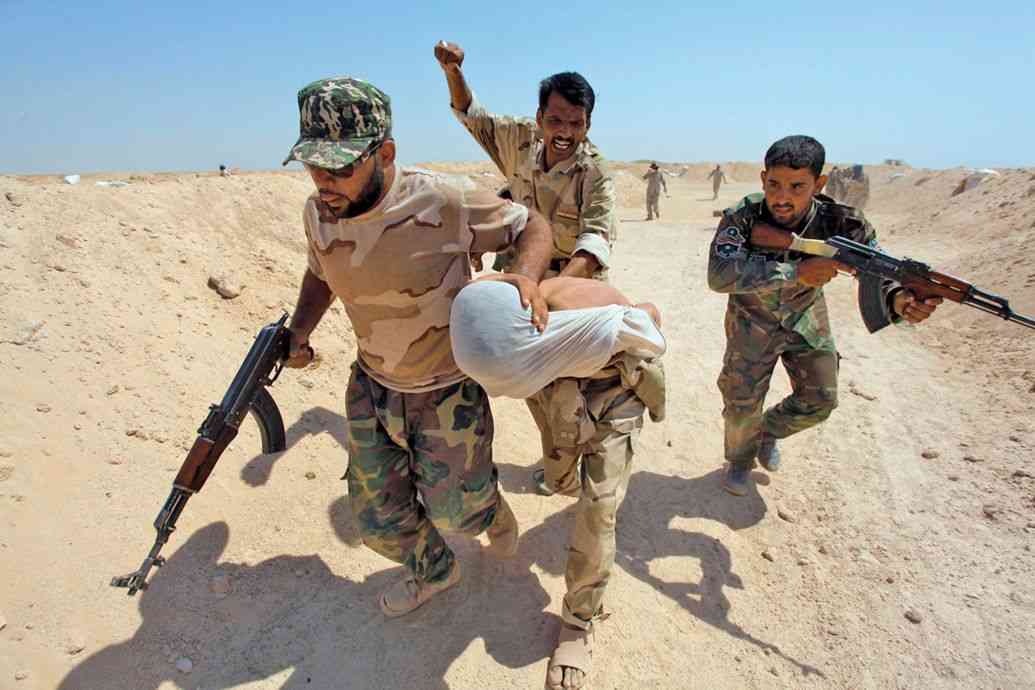 The year of 2014 saw the emergence, with government approval, of “Al Hashd Al Shaabi” as an umbrella of the militias in order to fight against ISIS. This militia is responsible for some of the most horrific crimes against the people living in the areas disputed to ISIS by the Iraqi government, and pursues a sectarian agenda which aims to systematically destroy entire villages and uproot their inhabitants in a widespread sectarian cleansing. Such widespread violations have been committed in Diyala, Salaheldin and Ta’mim province. Al-Hashad Al- Sha’bi has abducted and detained hundreds of civilians whose whereabouts is still unknown.

There are over 50 militias in Iraq with all of them exercising the authority of arrest, detention, torture and in many cases summary executions. The largest and most brutal ones are Mahdi Army, Badr Brigades, Asa’ib Ahl al-Haq and Kata’ib Hizbullah.

GICJ urges the UN Committee on Enforced Disappearances to take all action within its mandate to stop all arbitrary and unlawful arrests and abductions in Iraq.

The Iraqi authorities must urgently register all detainees and give access to their families, including to those in secret prisons and must ensure that there is clarity regarding the authority carried by all division of its security forces; multiple forces should not hold the authority to detain individuals.

All militias and other armed group should be criminalized and abolished.

GICJ request the UN Working Group on Enforced or Involuntary Disappearances to focus on the disappearances in Iraq in its future reports.

Changes to the Iraqi laws should be undertaken in order to reflect the provisions of the Convention.

A comprehensive strategy should be formulated aiming to search for all those disappeared persons in Iraq, before and after 2003.

The UN should take an effective role in ensuring that the issue of enforced disappearances be handled in a way to find answers for all families of those missing persons in Iraq, regardless of date, reasons, and ethnic or religious background.

Read online or download the full report by GICJ.